UniCredit Bulbank’s International Center wins in the Building of the Year national contest, receiving the Concrete in Architecture award 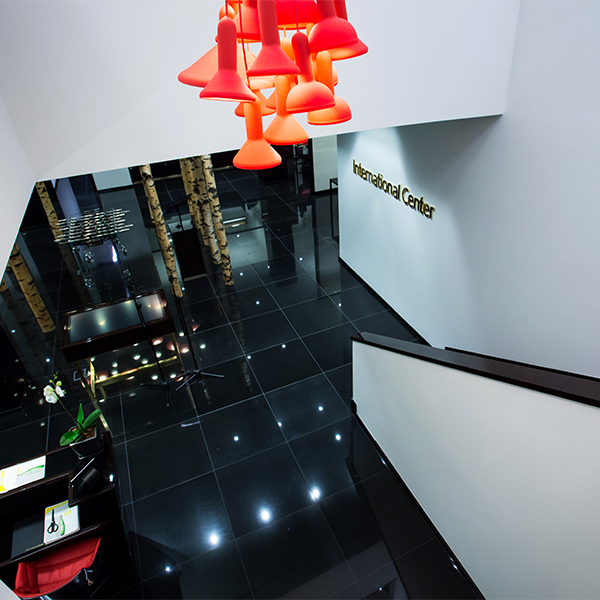 //SGS ARCHITETTI ASSOCIATI AND STUDIO SCAGLIOTTI RECOGNIZED WITH ANOTHER AWARD.

The UniCredit Bulbank building has received another prestigious award following its recognition as the “Innovative Business Space in the House 2015” by the Bulgarian magazine “Ideal Home.” The SGS Architetti Associati and Studio Scagliotti project has become a symbol of modern Bulgarian architecture.

In 2014, UniCredit Bulbank, Bulgaria’s largest bank, completed the International Center, a important project from a European perspective. The avant-garde center offers the most up-to-date services for those investing or considering investing in the national economy. Even Sofia’s mayor, Yordanka Fandakva, recognized the building’s tremendous potential during the 2014 inauguration. “The most important aspect,” she said, “is the opportunity that UniCredit has given the country to attract foreign investors.”

The City Media Group hosts the Building of the Year national contest, founded in 2002. A jury made up of representatives of prominent organizations, professionals and economic experts selects the award winners who are recognized at what has become the preeminent event for the Bulgarian construction and architecture sectors. In 2015, eight projects were selected among those completed during the previous year. UniCredit Bulbank received the Concrete in Architecture award after a meticulous analysis of the project that combines high-technology and green building without comprising esthetics and the beauty of Italian design.

This smart building is heated, cooled and ventilated using a VRV system. The lighting is LED and regulated by a computer-based system that clients can directly tap into using an app. The same app also allows them to reserve the meeting room of their choice.

The sleek, sophisticated lobby features floors made from lustrous black marble from India (80x80cm). The work spaces have an open plan with the only divider being the cutting-edge Italcementi walls made of i-light concrete that permits light to enter. All the furnishings were made in Italy. The wires and technical equipment are hidden from view. The lobby also offers an area for relaxing.

The first floor features a creative system of moveable walls that permit the space to be arranged to meet clients’ needs. Light, space and sound are in synchronicity. The meeting rooms’ floors were created with smooth, white Thassos marble (60x60cm) and lustrous black marble from India. The goal was to design a space that combines warmth and elegance.
The meeting rooms have been equipped with all the necessities to function as temporary office spaces.

Near the meeting rooms, there’s a complete kitchen and bar for clients’ use.
The colors red, black and white are a recurring theme in the building’s interior design.

This impressive project, located in a strategic position in the heart of the city and near the major administrative and commercial institutions, was completed in only three months. The work began in late July 2014 and was finished 30 October 2014, the date in which the reconstructed sections of the building were cleared for public use.

Luca Alessandro Amendola and Gianluca Geroli of SGS Architetti Associati are very proud to have received another esteemed award. Creating spaces that welcome has always been an essential aspect in the architects’ work. And once again, it’s been recognized as their signature style. 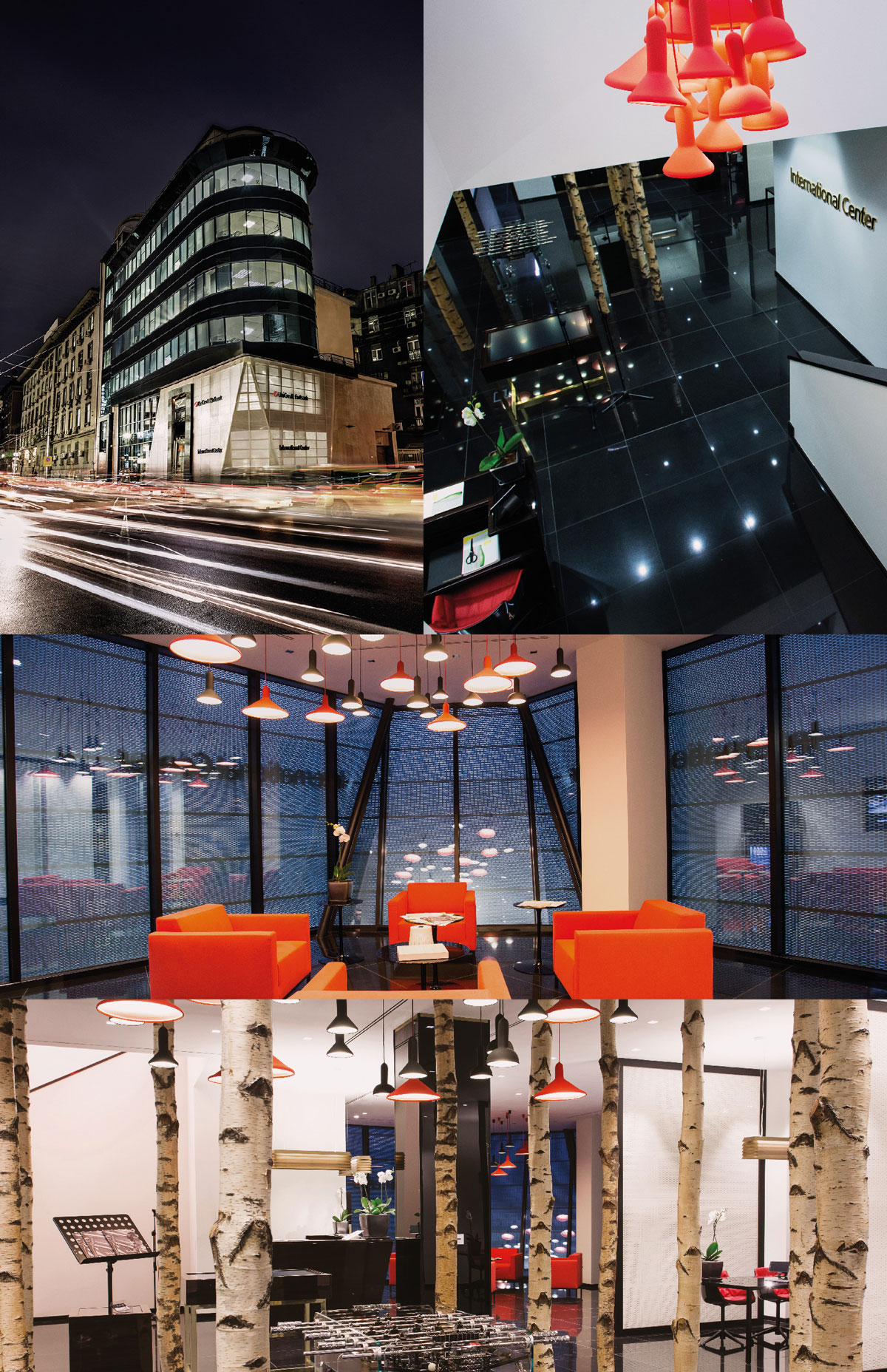 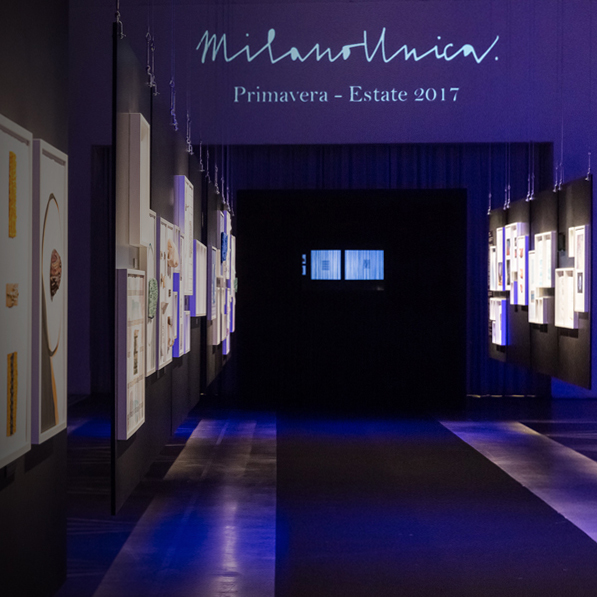 The 22nd edition of the Milano Unica textile trade show will take place from February 9-11 at Portello Fieramilanocity. The finest in Italian textiles and accessories for the fashion industry will be on display. Stylists and other industry professionals will find inspiration here for the spring/summer 2017 collections.

The Area Trend is at the heart of this Italian textile trade show. It came about following a selection process that, along with an event last November at the Pelota event space, involved exhibitors who brainstormed and developed themes with the guidance of excellent directors: Stefano Fadda, Milano Unica’s art director, and SGS Architetti Associati, which designed the Area Trend’s layout.

As with any creative endeavor, it is on the fringes that new and exciting ideas emerge. SGS Architetti Associati has cultivated an expertise in the fashion world. For years, the firm has designed and realized Moreschi stores and showrooms worldwide. This fashion sense has become an integral part of the firm’s magnificent architectural vision. The concrete result can be seen in Area Trend, a museum-style exhibit in which the concept and staging demonstrate the incredible research and work behind every single textile sample and unique button. It’s a sensory experience - visual and tactile - that follows a course, as if you were in a gallery, past frames in all sorts of sizes and shapes showcasing textiles and materials in a creative manner.

With the Area Trend project, SGS Architetti Associati demonstrates its expansive vision and its ability to provide in-depth consultations spanning the entire time frame of a project.

We encourage you to experience this innovative project. Wander around this textile art gallery planned for the next edition of Milano Unica. The following four thematic areas will illustrate and fantasize how we might dress in the summer of 2017:

Everything flows, nothing stands still in the watery depths populated by brilliantly colored and fantastic marine life and plants. An amazing, creative and expressive world.

A view from above, a aerial map of different areas of the world that shows geometric patterns of well-defined natural areas interrupted by man’s interventions. That is, the invasion of cityscapes and cement. The artificial world is as real as it is natural.

AFRICAN PUNKThe wilds of nature and the city collide

Africa - black magic and sensuous - with its breathtaking sunsets and extreme contradictions. A powerful world with its mix of fascination and gritty reality.

This theme is comprised of two words, “psycho” and “bit” that recall two worlds surprisingly aligned: the psychedelic that swirls in a pinwheel of colors and the technological that is immersed in elaborate geometries.

A press conference introducing the project is scheduled for the morning of February 9, 2016. More information will be forthcoming.

We look forward to seeing you at Fieramilanocity. Enter through Viale Scarampo and Viale Teodorico gates.