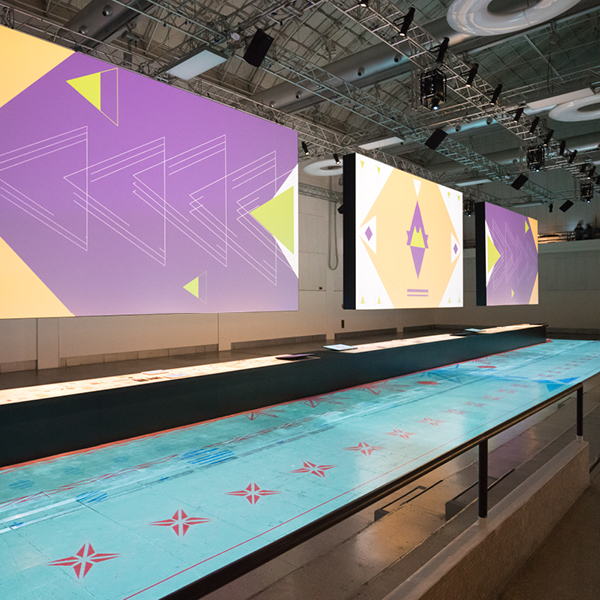 The pleasure of a journey, the dream of bringing together people of different cultures, the game of connecting past and present, these are the pillars on which Milano Unica has based its research on the trends for the next spring-summer 2018 season. Three macro themes have emerged, the result of a combination between a historical character and a true, yet idealized place, both for its glorious past and for its relevance in the collective imagination.

NEFERTITI IN IBIZA - The legendary queen of Egypt has been imagined while strolling around the shopping streets in Ibiza, where models, actresses, pop singers and international celebs parade in a glowing dimension of party-making and freedom of expression. The amethyst purple, the green shades and red hues of ancient Egyptian paintings, the feathers, the floral decorations, the symbols of the sun and the moon can be traced in the kaftans, in the prints and in the furniture of the homes in Ibiza. The binding link between Nefertiti and Ibiza is the love for a sunny and motherly spirituality.

KAZIMIR MALEVICH IN SORRENTO - The Russian artist was transported to the South, in the warm atmosphere of the Campania region: the square and round silhouettes, the vanishing points, the white spaces in contrast with Malevich’s yellow ones are those of the 3D geometric pattern tiles, the Sorrento majolicaware and flowers, the privileged destination for writers, poets and philosophers like Nietzsche, Goethe and Dickens. Here, the Sorrento majolicaware, lace, tatting and small fishing dories recall a tradition of craftsmanship and direct contact with nature. In fact, it was this ubiquitous expression of creativity that attracted people from all over the world, making Sorrento - from the ‘50s to date - a key destination for the most cultured and refined international jet setters.

CARLO MOLLINO IN TEHRAN - The architect from Turin flies to Persia to follow the traces of Iranian culture and Tehran, that has been transformed into a sort of earthly paradise with heavenly plants and palaces filled with mosaics and celestial representations, where the shah was used to host parties and entertain international celebrities - from Walt Disney to Indira Gandhi - thus contributing to creating a closed circuit between the Eastern and the Western world, which has always resulted in an enrichment of the world's greatest civilizations and, thus, becoming a source of inspiration for any form of creativity.  In this theme, the rose windows of the Persian churches create a dialogue with the precious decorations of Mollino’s furniture, the organic shapes so much beloved by the architect recall the nature-inspired patterns of Persian carpets and, also, of the seductive royal atmospheres of Turin and of the shah's court. 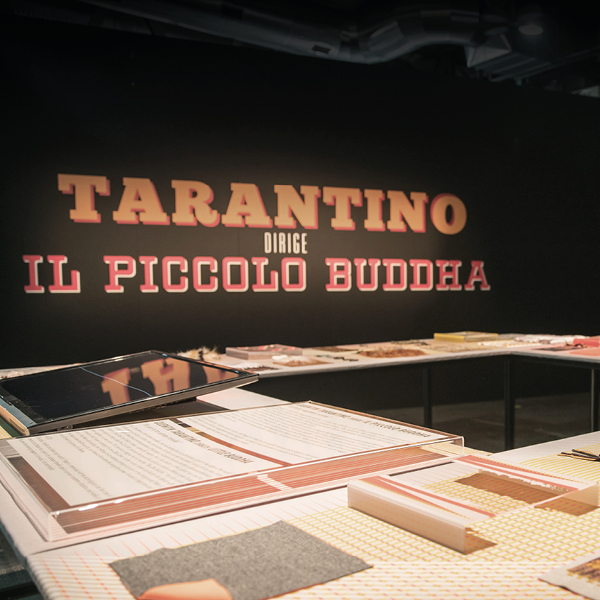 «Cinema is the essence from which dreams are made», said Charlie Chaplin.

Cinema as magic and especially as the art of aesthetic and contemplative reflection is the source of inspiration for the four trends that MilanoUnica has identified for Fall-Winter 2018/2019.

“From Hedonism to Trumpism”

The eighties with their shameless opulence and current self-congratulatory excesses entrusted to the web. The nostalgia of carefree times and the need to escape the contemporary. Bombastic beauties and the pursuit of eternal youth. And yet, the hedonism of that time and current “Trumpism”.

Accents on opulence made from a wealth of materials, baroque inflections and swerving couture but with an ironic nonchalance when dealing with luxury. For a lustrous yet practical effect.

“Victor Victoria” is a movie that Blake Edwards filmed in 1982 but whose screenplay was taken from an old 1934 film. To reinterpret this American romance-musical, set in Paris, the Spaniard Pedro Almodóvar was chosen who, with his distinctive narrative style, brings the heroine Victoria to the pop-glamour limelight, forced to pose as a man to earn a living.

Collages of fabrics and lingerie-like network and overlapping evening and day pieces, contrast of different weights with a vibrant infusion of colour and a crossover between male and female, for an unconventional style that occasionally shifts into masquerade, intended as a party game.

“The English classic with a fulfilling twist”

From the contrast between the intellectual training of the New York director Stanley Kubrick, not surprisingly a British naturalized citizen, and the imperturbability of a typically British character such as Sherlock Holmes, originates the imaginary particles of creativity that combine tradition and transgression, depth and superficiality, rationality and instinct.

Speed, pragmatism and elegance: this is the triad that characterises the theme. Appreciation of tradition and daring: new urgent needs lead to developing unreleased material and the true evolution of research arises from the dialogue between those with visions and those with needs, between those who create and those who consume.

“The spirit of an extreme traveller”

This is the theme of the extreme traveller, one who tackles life as an adventure, a path to the edge of the world, to discover new horizons, cultures, lives, and customs. But also a journey into oneself, looking for an inner, more spiritual strength. Hence the contrasting paradox of the poetics of Quentin Tarantino and that of Bernardo Bertolucci.

The simple, ritualistic and almost rustic world of Nepal is intertwined with the technological and fast one of American and blends into a style of an unbiased traveller able to survive in extreme situations and while at the same time remaining elegant in his wools, furs and mohair. 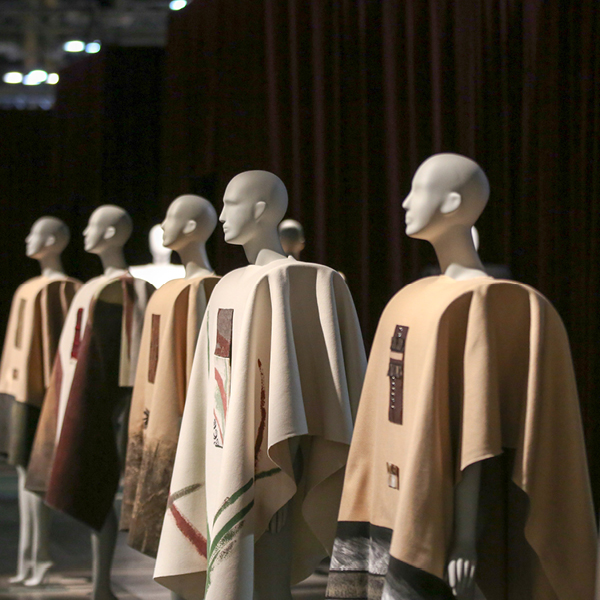 It is by the creativity of six great personalities that we've been guided to create a story of trends that would express the sublime side of elegance. These six personalities are apparently different from each other but only as regards their expressive language.No slogans, no abstract themes, therefore, to define Milano Unica's trends for the next autumn-winter 2017/18 collection, but the real names of the people whose creativity and genius, internationally recognized, represent a huge concrete reference, which is a source of inspiration for the design of new wefts and warps, and the creation of new accessories.

Burri and Piano make us reflect on the power of raw materials and their poetic capability of transforming it. In the field of textile and accessories, this means maximum processing and experimentation in order to produce fabrics, buttons, labels and sophisticated endings, pleasany to the touch, so rich to look like architectures.

Fontana and Hokusai, instead, are the alpha and omega of elegance. The black and white perfection of the Tao. Sharp cuts as opposed to beguiling and stormy curly waves. As fabrics, rich in embroidery and in laser cuts, revealing full-body cloth in contrast to hypermodern shaped and sophisticated multi-layered accessories.

On the other side, Albini and Portaluppi rely on lines and details, on the reinterpretation of the classics but in a less serious and more contemporary way. In a progression of symmetries, geometry games and prints which fully summarize the concept of the unique Italian excellence. 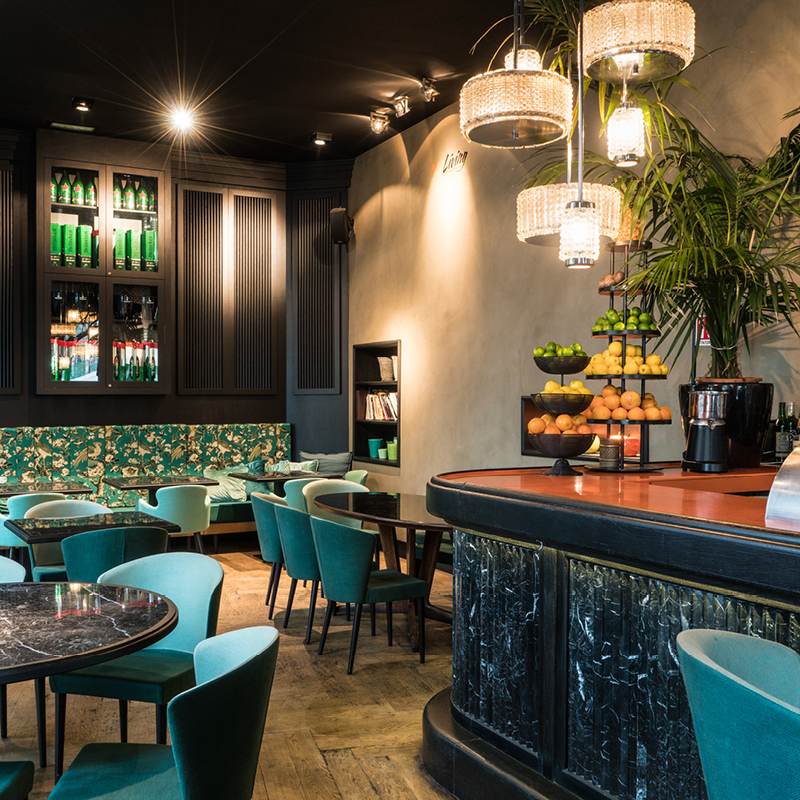 Living was established in May of 2003, inside of the Ex Postal Office characterized by a privileged view on the splendid scenery of the Arco della Pace. There was a desire to create a place alive both inside and outside, where the relaxing comfortable environment could cohabit with the vitality of a dynamic space, where sophistication and charm of typical Milanese style would blend into conviviality and natural Argentinean spontaneity of the owners.

The recent restyling gave new vitality to the ambience maintaining the internal distribution which includes the bar counter as the protagonist of the place which works as a joint between two areas of the restaurant. To emphasize this important point it was decided to replace the old coating with stripes of Nero Marquina marble cut in diamond-shaped section. The same material was used for tabletops and coverings of bathrooms where the tiles of different height and width create a geometrical pattern.

The chairs of enclosed forms rest on tapered hardwood legs, upholstered with cotton fabric of green shade by Dedar, summarizing in itself the formal elegance and comfort of the whole restyling. The environment is completed and characterized by walls which encase two rooms, decorated by panelling of painted wood, and frame large seats of retro shapes which are embellished with a hand-woven handicraft silk with oriental motifs. 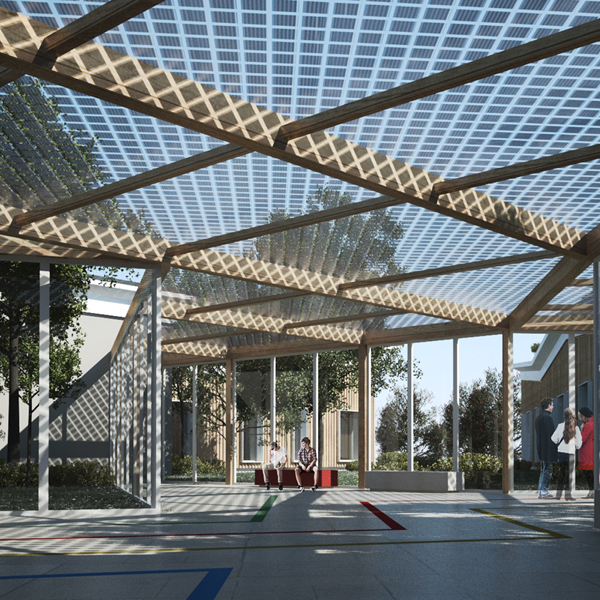 The task was the construction of a new building to be used as a kindergarten and primary school with infrastructure and services. The existing school and kindergarten are divided and located in several locations. The positioning of the new school aims to improve the area for all the citizens. The new facilities can be used not only as a school during the school hours but also as an entertainment and cultural centre which serves the whole village of Cintolese. The new school relates to an education that takes place not only through classical studies but also through the experiences that the child acquires in the surrounding environment. For this reason the space is thought rich and stimulating both on the level of volumes with contrasts of full and empty, and of internal organization.The school is single floor and is composed of five sections of kindergarten and fifteen classes of primary school. The building consists of two types of volumes: one is set of blocks with educational activities, services and facilities, another one is a transparent link which unites the whole school and functions as an internal public space.

load more hold SHIFT key to load all load all